The shimedaiko, short for tsukeshime-daiko 付締め太鼓, is a small, high-pitched drum where the drum head is sewn on a steel ring which is then tightened onto the body with rope or bolts. Also called sarugaku-taiko 猿楽太鼓, the drum has been used in a variety Japanese music ensembles and performing, including nagauta 長唄, hayashi 囃子, folk music ensembles called min’yō 民謡, and of course kumi-daiko. It is played with rather thin bachi.

The shimedaiko consists of the drum body, two specially treated rawhide skins that are sewn onto steel rings which are then fastened and tuned on the drum body with either rope or bolts. The drum body is shaped like a small barrel with the center portion being slightly larger than the parts where the drum heads are fastened. 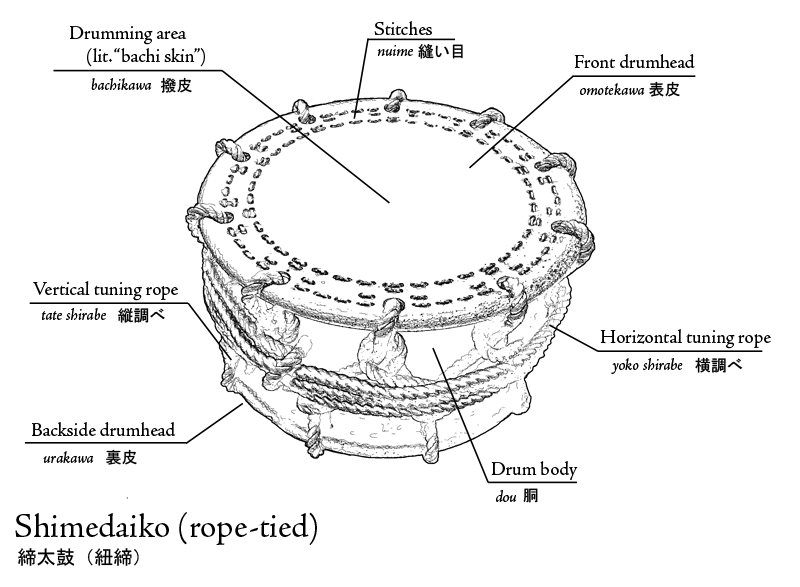 The wood of zelkova, pine or Japanese white cedar trees are most often used for the body. The usual diameter at the edges is around 25.5 cm, while the slightly larger portion in the center has a diameter of 27 cm. The body has a height of about 14.5 cm. After having been shaped and polished, the drum body is finished with wood lacquers that bring out the wood grain. Shimedaiko used in Noh performances are often elaborately decorated with gold and Japanese urushi 漆 lacquer instead, and several taiko manufacturers like Asano accept special orders for lacquered bodies. See this page for a particularly beautiful example.

The skin on the drum head is stretched on an iron or steel ring, and it has a standard diameter of 35 cm. Sometimes, the outer parts of the drum head are also being lacquered and decorated. The high-grade shimedaiko sometimes have a small piece of deer skin attached to the very center of the drum head.

Each drum head has eight to ten holes which are used to tie the drum heads to the body of the instrument using either rope or bolts. Usually a simple white rope is used for tying the drum heads, but intricately decorated drums for use in Noh or min’yō performances sometimes use orange, red or purple ropes instead.

Some manufacturers and taiko shops also offer shimedaiko that combine the aesthetics of a rope-tied drum with the functionality of a bolt-tied drum. Those drums are tied and tuned using the bolts, while the rope is just a decoration. See this page for an example.

This site uses Akismet to reduce spam. Learn how your comment data is processed.